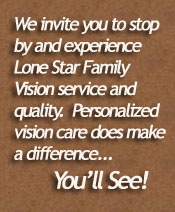 Dr. Widmann wasn't born in Texas, but he got here as soon as he could! He was born in Lafayette, Indiana and was raised in upstate New York. He attended the University of Pennsylvania, where he was a member of Phi Delta Theta fraternity and lettered in Gymnastics while earning his Bachelor of Arts degree in Biology. He also earned his Bachelor of Science and Doctor of Optometry degrees from the Pennsylvania College of Optometry, graduating in 1986. His four years of Optometry training included internships in Contact Lenses, Pathology and Low Vision in Hawaii, Vancouver, WA and the William Feinbloom Center in Philadelphia respectively. He has been practicing optometry in Waco since 1986. He obtained his certification as a therapeutic optometrist in 1994. Dr. Widmann is a husband and father of three; he is an avid car enthusiast/racing fan and enjoys spending time with his family and rescue dogs.